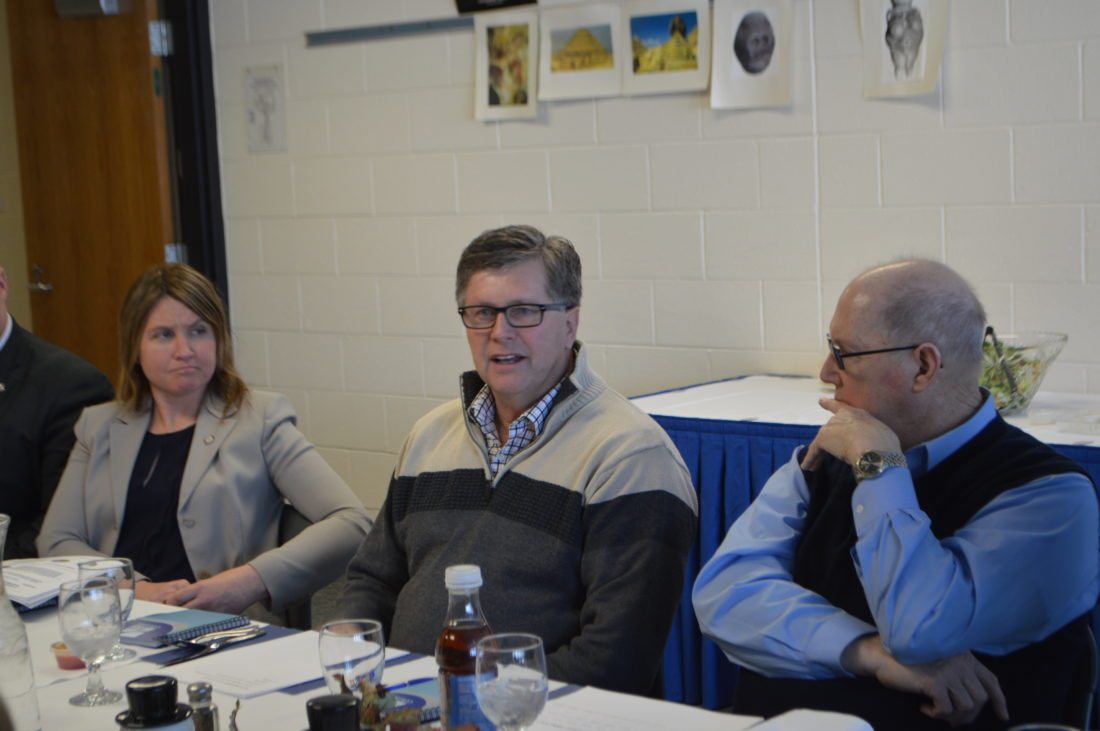 ESCANABA — Members of the Bay College Board of Trustees and state legislators discussed the potential remodeling of Bay’s Catherine Bonifas Building, funding for community colleges in Michigan, and other topics during a luncheon and special board meeting held at the college Friday.

During the luncheon, Bay College President Laura Coleman spoke about a capital outlay the college is seeking from the state.

“Bay College would like to do a renovation on the building that you’re in right now — the Catherine Bonifas Building,” she said.

According to Coleman, this project would allow the college to make the Catherine Bonifas Building more energy-efficient.

“It’s not the biggest building on the campus, but it costs us the most to heat and air-condition because it’s kind of leaky,” she said of this building. Remodeling the Catherine Bonifas Building would also allow the college to adjust the building’s classroom layouts and introduce new spaces for students.

This project would cost an estimated $2.4 million, Coleman said. She asked the state legislators in attendance at the luncheon to support a $1.2 million match in state funding for this project. The remainder of the project would be funded through Bay’s millage.

Coleman also spoke about Bay’s funding model Friday. She said that, in 1992-93, state appropriations made up 45 percent of Bay’s funding. However, by 2016-17, this amount had shrunk to 32 percent.

While Bay has one of the highest millage rates for colleges in the state, their property tax funding only increased from 13 percent to 15 percent over the same period of time due to the area’s relatively small population.

As a result of these factors, the college has had to increase their tuition and fees over the years. Coleman encouraged the legislators present at Friday’s luncheon to avoid cutting funding to community colleges.

The “dark store” tax theory was another topic addressed Friday. Last fall, the Michigan Supreme Court rejected Menards’ appeal in a tax dispute with the City of Escanaba related to this theory. However, some Michigan legislators still feel that legislation should be put in place on this issue.

Casperson said that, in the previous legislative cycle, efforts to deal with dark stores were passed by the House but were not taken up by the Senate. He felt that this has become a political problem, as some of his fellow legislators have characterized this proposed legislation as a tax increase.

During the luncheon, Coleman also asked legislators to put pressure on universities to work with community colleges to expand the statewide transfer agreement to 60 contact hours.

“It’s something that should happen — there’s no excuse for it to not happen,” she said.

In addition to these topics, legislators at the luncheon spoke about their legislative goals for 2018. LaFave told those in attendance he had introduced a bill related to no-fault car insurance on Thursday.

“(It) will repeal no-fault,” LaFave said of this bill.

Casperson and LaFave also spoke about a Northern Michigan alliance they are working to establish. This alliance would have the goal of ensuring that this region of the state receives its fair share of funding from taxes on cigarettes and alcohol. Casperson has a bill in the Senate related to the alliance, and LaFave has an identical bill in the House.

Legislators discussed the Michigan State University sexual assault scandal at the luncheon, as well. LaFave — who received his undergraduate degree from this college — said he was extremely disappointed in how former MSU president Lou Anna Simon and the college’s board responded to this scandal.

“I think that the public’s trust in the (former) MSU president and the board has dwindled to the point of nonexistence … and I feel the same way,” he said.

Casperson said he hopes this situation will be fully resolved.

“People (that) have done wrong need to be held accountable,” he said. He noted that he also hopes innocent people are not hurt in the process.

Dianda said he felt this luncheon served as a good opportunity for both Bay and the legislators who attended it.

“(It’s) very beneficial to have the community college engage with the legislature,” he said.

MACKINAW CITY (AP) — A 200-foot-long broken boring pipe remains embedded in the Straits of Mackinac and may not ...

ESCANABA — Members of the Bay College Board of Trustees met “Ann” — a training mannequin that Bay nursing ...