Play Review: ‘Fruitcakes’ performance is a holiday treat for area

ESCANABA — And you thought you were busy during this time of year! Try juggling an epic number of fruitcakes, an outdoor Christmas light extravaganza, two stiff-necked Southern sisters, a foibled, local wise man dealing with a runaway, a local epidemic, dogs in sheep’s clothing, a lost feline named “Tutti Frutti”, an enchanting Christmas hog, and keep a merry spirit while doing so. You can thank director Meg Holeva and production stage manager Tim Krebs, along with a top notch production staff, for stirring up this delightful holiday comedy to serve to our community, with plenty of leftovers, so be sure and bring the whole family!

The cast of characters in “Fruitcakes” are as mixed as the ingredients in it’s namesake. While the antics of the actors are zany, unexpected, and even corny at times, they remain true to the deeper messages of the story. The holidays can often engender family frictions, loneliness, and even despair, and this ensemble provides an antidote in the form of reconciliation and compassion that taps into our shared humanity.

The fun begins at Mack’s barn, where artist/inventor Mack, small-town supplier of whirligigs, Christmas trees, southern comfort, and pithy wisdom, is movingly portrayed by newcomer to Player’s stage, Allen Palmgren. He sets the small-town tone of the characters interactions so well, that you automatically relax as the plot unfolds, despite the general bedlam.

A runaway boy, Jamie, arrives and is soon embroiled in the nutty yet charming traditions and relationships of the town. Jamie is played by Michael Rexford, who captures the range of sullen resentment to eager hopefulness that besets the life of every teenager, especially those wounded by a breach of trust.

The town’s Christmas pageant shines the spotlight on an ensemble of adept young performers; Jorja Heitman as Sally (playing an angel) brings tidings of much joy to the stage, and many will relate to the dismay of Little Beebo (well depicted by Spenser Hartman), in being cast as a sheep—(again!).

Other pots on the stove start bubbling with the fractious interchanges of the sisters, Miss Alice and Miss Sarah, played by Julie Rexford and Dawn Martin. They bring out the awareness of family ties and relationships that bind us, shape us, and give meaning to our lives. Big-hearted Mattie Sue, played by Lisa Lalonde; town poet Skeeter, played by Andrew Jones, and the sole police officer Beebo, played by Mark Cowman all give laudably delightful performances that show you don’t have to have all your marbles in order to help or be of service to others.

Lily Benetti carries off the role of James, grandson of Mack, and son of Rick, played by Trevor Sebeck, in the crowd pleasing finale to the tale.

Get your tickets today and add some holiday cheer to your season with this warm and witty play by Julian Wiles.

Performances will continue Dec. 5, 6, and 7 at 7:30 p.m. and Dec. 1 at 2 p.m. Tickets are available at the William Bonifas Art Center or online at playersdenoc.org/ticket. 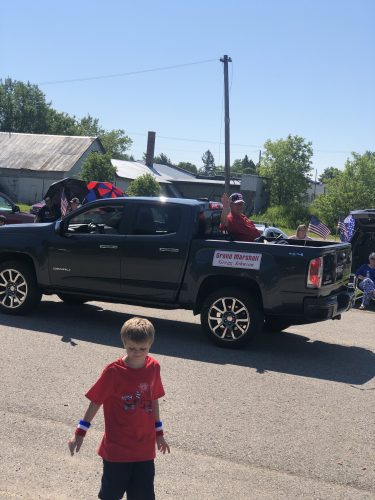 Sault Tribe Board of Directors to meet

SAULT STE. MARIE, Mich. — A special meeting of the Sault Ste. Marie Tribe of Chippewa Indians Board of Directors ...