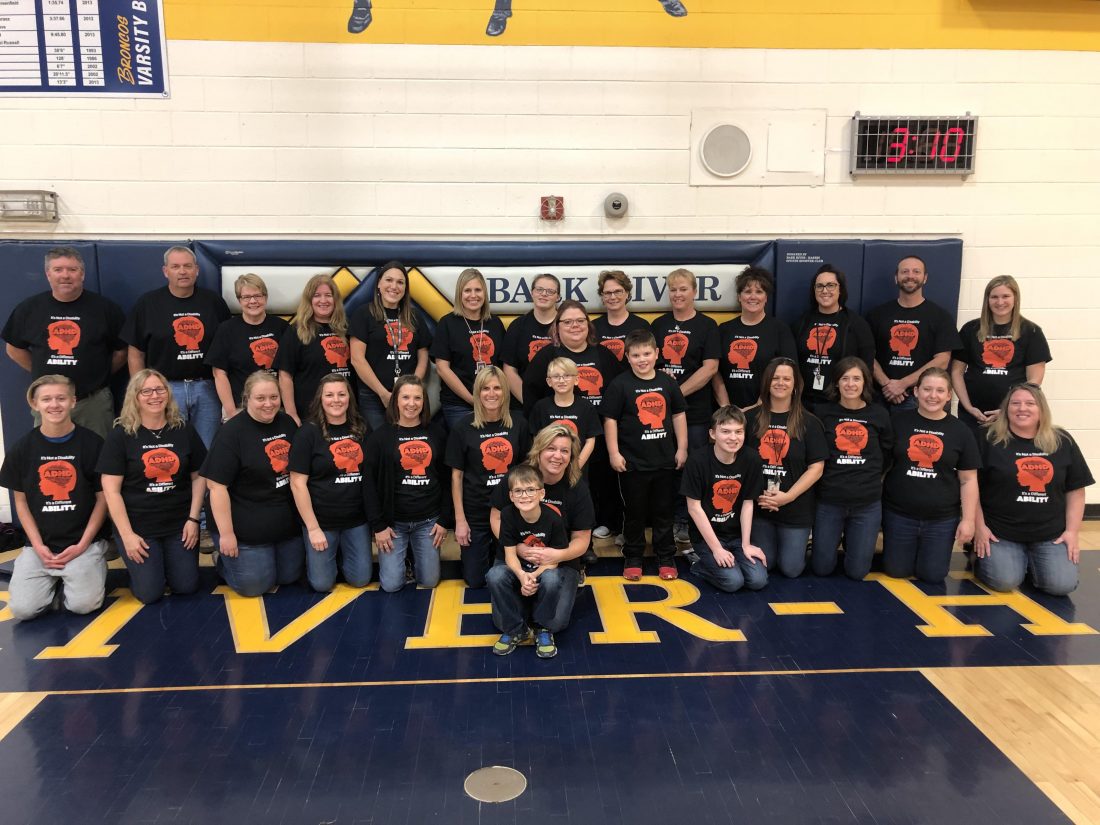 Courtesy photo Bark River-Harris Schools students and staff pose for a photo while wearing the shirts sold by the school to support ADHD awareness.

BARK RIVER — October was ADHD awareness month. in order to dispel some myths and bring awareness to the challenges individuals with ADHD face, Terra Stenberg M.A., an art teacher at Bark River-Harris Schools and has a son with ADHD, came up with an idea to sell ADHD t-shirts. All profits went toward a ‘fidget fund’ for Bark River-Harris School, which is extra money for sensory items teachers might like to try but may not have the funds for. Fidget items can help children with attention or anxiety issues to stay focused and calm in the classroom.

“I wanted to bring awareness to ADHD, for my son and my students who deal with the disorder and to dispel some of the myths people have about ADHD,” said Stenberg. “I told a friend of mine the idea I had for the T-shirt and her husband (a graphic designer) designed it for me. I reached out to Traci Corrigan who owns Riverview Custom Tees, L.L.C. to see if she would be able to do this print job for me. Not only did she help, she generously printed the shirts and charged us only what it cost her. This enabled us to bring in more of a profit.”

A total of 67 shirts were sold and raised $603 for the fidget fund. The fidget fund has been used to purchase items like fidget seats, fidget kick bands, weighted toys and stress balls. Rick and Nancy Prica of NK electric, not only purchased shirts, they also donated four wiggle seats to BR-H classrooms.

“I feel very fortunate to live in a community where this has been so generously embraced and I appreciate everyone who has contributed,” said Stenberg. “So many of my co-workers hopped on board to bring awareness and help their students, as well as my family, friends, students and parents. Several individuals have reached out to me to share needed information or tell me their stories and struggles. It has definitely been a rewarding October.”

ESCANABA — To protect patients, family members and staff during this time of increased seasonal flu activity and ...

MARQUETTE — The Fred Wara Chapter of Trout Unlimited, in conjunction with the Northern Michigan University ...