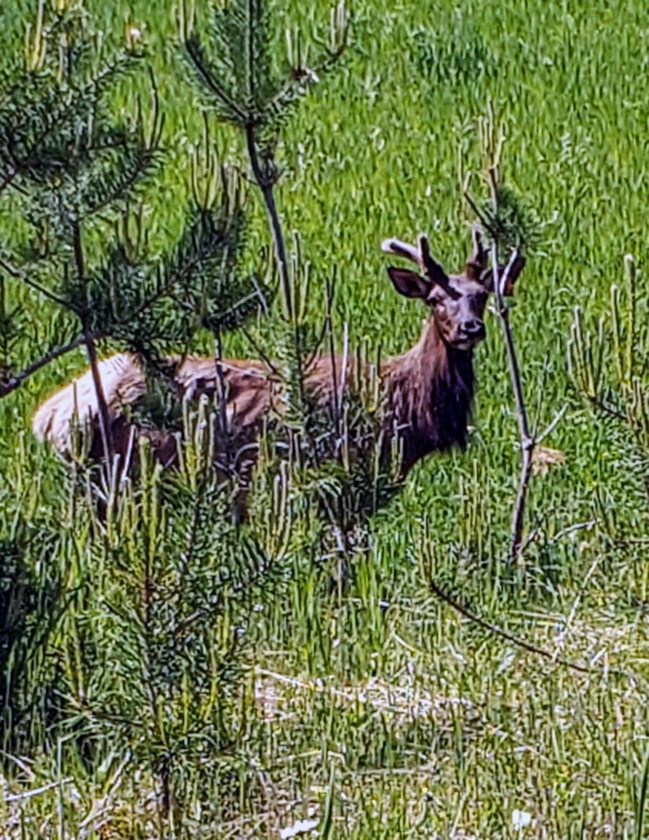 MENOMINEE — Wildlife biologists and technicians with the Michigan Department of Natural Resources have been tracking reports of a bull elk spotted in the south-central part of the Upper Peninsula in Menominee County.

The young elk was reported first by a private landowner June 6, within about 10 miles of the Wisconsin border. Since then, there have been several additional sightings, including some unconfirmed reports of an accompanying cow elk.

The presence of the bull elk has been confirmed with photographs.

Elk, like deer and moose, are mammals of the deer family, referred to as cervids.

“Our DNR biologists are monitoring the situation as we work to confirm the origin of this animal,” said John Pepin, DNR deputy public information officer. “Contact has been made with privately owned cervid facilities within a reasonable range of the sightings, and no elk from those operations have been reported missing. We have also checked with agency officials to confirm there have been no reports of elk missing from Wisconsin facilities.”

The bull elk has a three-digit orange ear tag in its left ear, which has not been seen clearly enough to read.

DNR biologists have been working closely with their counterparts at the Wisconsin Department of Natural Resources to establish whether the elk may be from one of the state’s two wild elk herds.

According to the Wisconsin DNR website, elk are found in two distinct ranges there. The largest, and oldest, elk herd in the state is the Clam Lake elk herd, which ranges across Ashland, Bayfield, Price, Sawyer and Rusk counties in northern Wisconsin. The other, the Black River elk herd, is found in the forested region of Jackson County in the central part of the state.

“This is based on their knowledge of some of the Black River elk being reported outside of their typical range over the past couple of months,” Sexton said. “It is also based on the color, style and placement of ear tag reported, along with the estimated age of the animal gathered from public reports and photos. We should be able to confirm the origin once we have an accurate report of the ear tag number.”

The latest estimates put the Clam Lake elk herd at over 250 animals, with about 80 more in the Black River herd.

Elk are known to have a large range and, like deer and other animals, likely move back and forth across the Michigan-Wisconsin border. Michigan’s native elk disappeared from the state around 1875.

“Somewhere along a high road, the air began to turn cold, she said she missed her home. I headed on alone,” – ...

Little Bay De Noc: Fishing slowed with the abundance of food available, such as alewife and the hex hatches. ...

Column: If we could keep summer in a bottle

Creel clerks hope to connect with anglers this summer

LANSING — As this year’s open-water fishing season gets underway, anglers at many lakes, rivers and Great Lakes ...

Showing off his power: Torkelson has shown Tigers why they took him No. 1

Arrest made after shots fired at Gladstone house