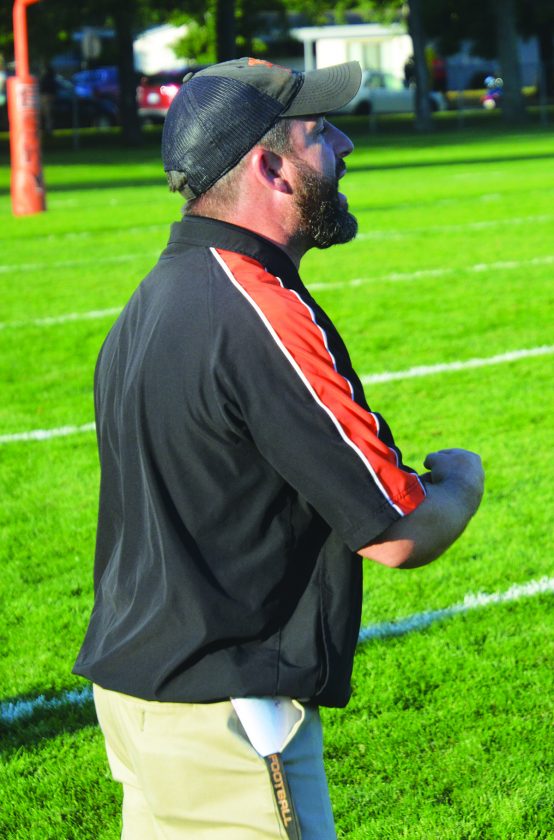 That will be the story Friday night when Escanaba welcomes Marquette for its Great Northern Conference opener and annual homecoming football game at 7 p.m.

Eric Mason, a native of Escanaba and a former captain on the Escanaba football team, is in his first season as head coach for the Redmen. Mason picked up his first varsity win last week when the Redmen blanked Sault Ste. Marie, 31-0.

Mason won’t be the only familiar face on the opposing sideline Friday night as former Esky head coach Dan Flynn is on Mason’s staff as an assistant. Flynn was Esky’s coach from 1986-2011, finishing with an 136-110 record. He was with the program since 1971, totaling 41 years on the staff. He also spent 14 years as athletic director from 1982-96 and is a U.P. Sports Hall of Fame inductee.

The Redmen will provide an interesting challenge for the Eskymos, who are ranked No. 1 in the U.P. large school division and No. 3 in the state after starting the season 3-0 with double-digit victories over Alpena, Petoskey and Sault, Ont. Korah. The Redmen dropped their first two games to a couple of tough Traverse City schools, so Howes isn’t putting much stock into their record.

“Watching them on film, it’s kind of like looking in the mirror,” Howes said. “They have a very fast quarterback (sophomore Austin Ridl) and they’re tough on defense. We know we have our hands full. Their record is deceiving — they have a very nice team there. They’re very scary on paper.”

Howes acknowledged there is a different vibe this week with homecoming week and getting ready to play a conference game against one of just two teams to beat Esky during the regular season last year.

“We go week-by-week and game-by-game, but playing our first U.P. team and Great Northern Conference opponent means a little bit more. We played the two downstate teams and the Canandian team, but we’re ready to play our first U.P. football,” Howes said. “There’s a different vibe. The kids are focused and they know the task at hand. When it comes time to play, they’re going to be mentally focused and ready to go.

“The energy is quite a bit higher. Playing at home on homecoming, we want to protect our home field. If we take care of our home field, everything else should work out just fine.”

Escanaba won’t be the only Delta County team to host a GNC opponent this week as Gladstone will look to bounce back against Kingsford. The Braves were 2-0 before Menominee came to town and left with a 42-6 triumph last week.

Braves’ coach Jeff Hansen said there is a lot of positive energy in the locker room as the Braves are eager to get the sour taste out of their mouth and bounce back.

“I told the players after watching the film Sunday, ‘I don’t know about you, but I want to get back to work and get back to the ground.’ Any time we get a conference opponent in our house there’s a lot of good vibes. It’s awesome that we get to play against another GNC team to erase some of the sting and try to just get back on track.”

In order to do that, the Braves will have to execute better than they did against the Maroons.

“We actually played pretty good football, but we couldn’t score in the red zone and we didn’t execute on the critical plays. The focus is to execute better and keep the offense on the field.”

Defensively, Hansen noted they will look to add more beef on the line so teams can’t line up and run between the tackles as easily, which will definitely be key against the Flivvers. The Flivvers are 1-2, but have opened the season playing stiff Wis. competition under first-year coach Mark Novara.

“We’ve watched some film on Kingsford. They run a pretty traditional offset I-formation, the way Kingsford looked back in the 90s,” Hansen said. “They do a lot with their fullback. The wing-T system relies on the fullback and they like to play-action pass. They use lots of trap type looks, so you can’t get caught with your eyes. When you use eye discipline against wing-T teams it gets you in trouble.”

Hansen believes the loss to Menominee will help moving forward.

“It definitely helps. For one, it underscores the need to play good football at the most important points of games. It’s also extremely beneficial to see how we’re going to react to adversity, and it’s a good opportunity to look at the character of our team,” he said. “When we watched the film, there was no point where we were giving up. They (Maroons) just made the plays at a more critical point. You can’t get too high or too low during a football season. It’s not something you hide from. We’re going to keep our chin up, chest out and move forward.”

Elsewhere, Rapid River looks to pick up its first win in its homecoming game against Cedarville in an eight-player contest. The other local eight-player team in action is No. 1 North Central, which visits Ontonagon. The Jets are coming off a big 20-14 win over No. 2 Pickford.

Other 11-man games include Manistique hosting Negaunee and Bark River-Harris visiting Gogebic. All games kickoff at 7.

Two eight-player tilts are on the schedule for Saturday, as Carney-Nadeau hosts Engadine at Powers while Superior Central welcomes Pickford. Both games kickoff at 1 p.m. EDT.