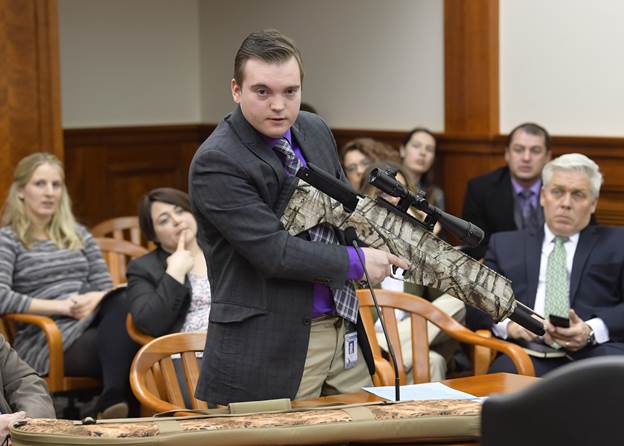 Courtesy photo State Rep. Beau LaFave shows the House Natural Resources Committee the ease with which someone with a physical disability can use a pneumatic air bow. The first-term representative from Iron Mountain has introduced legislation allowing pneumatic air bows to be used for hunting in Michigan.

LANSING — State Rep. Beau LaFave of Iron Mountain recently testified before the House Natural Resources Committee in support of his legislation allowing the use of pneumatic air bows for hunting in Michigan.

Pneumatic air bows function similarly to crossbows in that arrows are loaded one at a time, the bow is cocked and then fired with the pull of a trigger. Unlike a crossbow, it uses compressed air to launch the projectile, a useful feature for hunters with disabilities.

“Crossbows and compound bows require quite a bit of strength to cock,” LaFave said. “Pneumatic air bows take strength out of the equation, offering people with physical limitations a safe, reliable and humane way to kill deer.”

LaFave, whose personal experiences have made him a strong advocate for people with disabilities, said he introduced the bill after being approached by a local woman with a passion for bow hunting who now has multiple sclerosis.

“She has never been a rifle hunter, she’s never going to use a shotgun, she’s just not interested in that type of hunting,” LaFave said. “Unfortunately, her disabilities now prevent her from being able to do the thing that she loves. This legislation would allow her the opportunity to get back into the woods and take back part of her life that she’s been missing out on due to physical limitations.”

LaFave’s bill would direct the Natural Resources Commission to consider allowing licensed hunters to take game with pneumatic air bows during any open season in which a firearm may be used. Additionally, an individual with a disability and a permit would be allowed to hunt with a pneumatic air bow during bow season.

ESCANABA — Bay College was one of three colleges recognized at the DREAM Conference on Feb. 20 for showing growth ...

ESCANABA — MSU Extension’s Dining with Diabetes program is a fun and interactive four-session series for ...

Mike didn’t get it done

From fighting nightly insomnia to sleeping like a baby